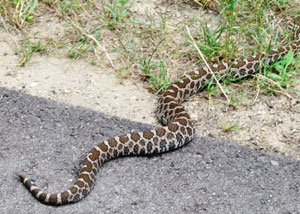 If you find yourself exploring grassy or bushy terrain, you may end up hearing something that no one wants to hear: the rattle of a rattlesnake.

Rattlesnakes are commonly found in dry areas with a lot of camouflage, such as grass and dry weeds. Their clever disguise and ability to hide make them difficult to spot.

Should you hear the warning of a rattlesnake or are fortunate enough to see it prior to disturbing it, don’t panic. While snake bites do occur, they are relatively uncommon. Rattlesnakes don’t go out of their way to attack. They typically only do so when they feel threatened.

So what do you do when you encounter a rattlesnake? 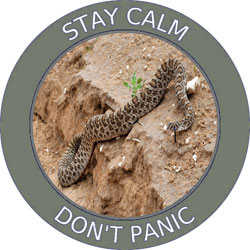 One of the worst things you can do when coming across a rattlesnake is to start panicking. Snakes rely on vibrations in the ground to determine where you are. If you start moving fast and abruptly, you’ll only scare the snake more.

If you’ve seen the snake before you came across it, give it a lot of space. You can easily walk around it without frightening it. Just keep in mind that rattlesnakes can coil up and strike at great lengths, so give it as much space as possible.

If the first indication of a rattlesnake’s presence is the sound of its rattle, you’ve already startled it. Instead of running, stay still. Chances are, the snake will stop rattling and slither off after it has calmed down. Humans are much bigger than snakes, so they don’t see any benefit in biting if it doesn’t need to protect itself. They’ll more than likely slither away to safety on their own.

If You Are Bitten

If bitten, you should calmly think about your next move. If you are near a car, simply walk to your vehicle and drive to the hospital. If not, you should call an ambulance and wait. While it is important to get to a hospital quickly, it’s never a good idea to start running and panicking.

Antivenom should be administered within four hours of the bite. However, it can still work up to 24 hours later. It’s important to get help quickly, but calmly.

The main thing to remember after a bite is to keep the venom contained. This means keeping the bite location under your heart and staying calm to avoid circulation of the venom.

Things You Shouldn’t Do

There are a number of things you shouldn’t do when bitten by a rattlesnake. Popular culture has given people ideas about how to properly contain snake venom. While these methods are tempting, it’s important to avoid doing them at all costs. In fact, some methods will do more harm than good.

You may have seen action heroes suck out the venom with their mouths. In real life, this is incredibly dangerous. Not only are you exposing your mouth to venom, but you are also introducing bacteria into the wound. With that being said, suction devices specifically made for venom can be used, as they do not involve your mouth.

Other things to avoid are tourniquets and ice. It’s not uncommon for bite victims to place ice on the wound to soothe it or apply a tourniquet to restrict blood flow. This will only cause lasting problems. It can harm healthy tissue and actually cause the venom to spread more quickly. In fact, most amputations and serious issues arise because of these methods.

If you’re ever in an area that is home to rattlesnakes, there are a number of safety precautions you can take. Proper knowledge of what to look out for and how to stay safe can prove to be beneficial should you ever encounter a rattlesnake. 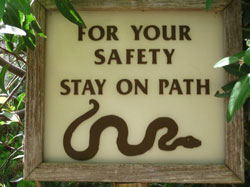 One way to avoid rattlesnakes is to avoid their natural habitat. They generally thrive in areas with tall grass and thick brush. You can easily avoid these areas by sticking to established trails and areas.

Snakes will usually avoid open areas in favor of somewhere they can hide. While not always possible, it’s a good idea to stick to somewhere safe.

Be Weary of Your Surroundings

Rattlesnakes can easily blend in with the surroundings. You should always look ahead and never place your feet or hands somewhere you can’t see. If you come across an obstacle you need to get over, never blindly hop over it. Instead, take every step cautiously and check out where you are going next. This will help you avoid any unwanted encounters.

Snake proof gear is your best bet against snake bites. Boots, gaiters, and chaps are all carefully designed to protect you against the fangs of a rattlesnake.

Gaiters are essentially guards that cover up the area below the knee. Chaps are very similar, however, they cover the entire leg. They contain thicker protection below the knee.

Both gaiters and chaps are versatile and can be worn with normal clothes and shoes. The thick material used is virtually impenetrable by snake bites, keeping you safe wherever you go.

Rattlesnakes shouldn’t deter you from exploring the natural terrain. Whether you are enjoying a casual hike or doing some work outdoors, it’s important to know how to handle a rattlesnake encounter. With the proper knowledge, you’ll know what to do regardless of how the encounter ends. With the right precautions and preparation, you can explore with confidence.