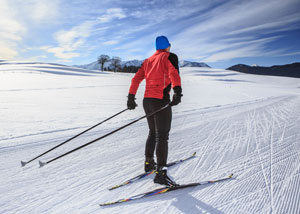 When most people hit the slopes for the first time, they’ll learn classic cross-country skiing. It’s the most traditional form of skiing and first originated as a way to get across the snowy tundra.

Because of this, it’s often seen as a basic and somewhat boring form of skiing. If you’re looking for a more thrilling and challenging option, check out the guys that are skate skiing.

Skate skiing grew in popularity in the 1970s and is now seen as the cooler and sexier alternative to classic cross-country. It’s fast, rigorous, and graceful. While the other guys are awkwardly clunking along through slow trails, skate skiers are sweeping through scenic paths getting a thorough workout.

The main difference between skate skiing and cross-country is technique. Cross-country uses diagonal strides that mimic the natural movements of walking. The arms and legs move in the same direction the skis are gliding. Skate skiing is more like inline skating. It uses lateral movements and shifts in body weight to create forward momentum. The two ski styles are also generally done on different types of trails, with skate skiing done best on smooth packed snow.

While both styles have their perks, skate skiing is best if you want a workout. It’s not about going slow and steady, but rather pushing your entire body to achieve great speeds through the slopes. While it may seem intimidating at first, all it takes is some basic technique, excellent fitness, and lots of practice to master.

How To Skate Ski

Skate skiing is often seen as the more difficult of the two styles, and with good reason. Truth is, skate skiing requires a lot of endurance and strength. It’s easier to pick up if your fit, but that’s not to say anyone can’t give it a try. There are a few basic techniques that anyone can learn and practice to dominate the sport.

This technique is primarily used during a climb uphill. It can be a bit tough at first because it requires a lot of strength to keep moving. It prevents skiers from sliding back or stalling when there’s a slight incline.

First, pick a side to pole on. Because skate skiing is all about lateral movements and timing, you need to pole on this same side each time. Simply plant the poles into the snow.

When this happens, the ski should hit the snow at the same time. Use the poles to push forward and shift to the other ski to glide. This technique relies heavily on good timing. Each ski should glide equally even though poling occurs on a single side.

Also referred to as the “two skate,” this technique is the one that will be used most. It’s great for medium speeds and riding through flat portions of a trail. Once it’s mastered, it can even be used to get up small inclines.

The move utilizes long strides and unique hip movements. Both poles are used to gain momentum. To start off, your hip and body weight should be on a single ski. Immediately after the poles hit the snow, drop the knees and hips a bit on that same ski. Then, push off with the poles. After push off, shift to the other ski with the knees still bent. As you bring your poles up for the next push, bring the hips up. Essentially, the hips should be making a “U” shape as you move from ski to ski and push off with the poles.

This alternate version of V2 is like a combination of V1 and V2. It requires poling off on one side like V1 and the ski should hit the snow slightly after the pole hits the ground like in V2.

Pick a side to pole on and shift your body weight to that ski. Plant the poles into the snow and drop down on that ski. After you pole off the snow, push your body to the other ski and come up to complete that “U” shape. Then, reverse the motion by dropping down, pushing to the other ski, and coming up again.

When your hips come back up, bring the arms up to pole again. You should pole only on the single side. This technique is great for achieving fast speeds. As always, practice timing to get the best results.

Due to the nature of skate skiing, you’re going to want to invest in quality gear designed for the sport. Sure, you can skate ski on cross-country models, but they’re not exactly designed for speed and efficiency. This goes far beyond the skis. Everything from the poles to the bindings are expertly designed for performance. 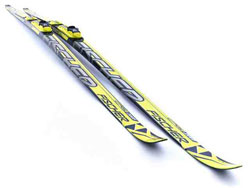 The first noticeable difference between skate skis and cross-country skis is the length. Skate skis are approximately 10 centimeters shorter, though this depends entirely on the skier’s particular measurements. This shorter length makes it easier to lift the ski and stride forward.

Longer skis can get in the way and feel awkward. With that being said, too short of a ski will result in a loss of stability.

To help with speed, these skis are also more narrow. This decreased width creates less resistance on the snow. They can glide smoothly over packed snow without issues.

These skis also lack a sidecut. This inward curve only makes it more difficult to control, which can be a big issue when speed is introduced into the mix. Wax is often used, but only for glide. Skate skis have a waxable base because the edges are used for traction. If the ski had a non-waxable base with grip, you couldn’t perform any of the skate techniques.

When it comes to camber, skate skis tend to be flatter. The camber refers to the arch from end to end. Skate skis have an alpine camber that’s very minimal compared to the cross-country camber. This subtle arch makes it easier to push off the edges of the ski. The camber also has an effect on the stiffness of the ski. As a result of the small arch, these skis have less flex than cross-country alternatives. 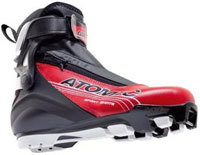 When choosing a ski boot, it’s important to go with a comfortable option. The feet will work overtime with skate skiing. It’s not uncommon for skiers to experience fatigue and pain due to improper boots.

Skate boots need to have rigid ankle support. This helps to protect the ankle from the repetitive twisting motions. They also have stiff soles to keep the foot taught and prevent forward flex.

These slight differences can help to improve performance and avoid unwanted movements that can affect your technique.

Bindings are used to attach the skis to the boots. While they may seem basic, there’s actually a few different types to choose from. It’s important to choose a binding that goes with the specific boot chosen.

Skate skis usually use one of three options: New Nordic Norm, Nordic Integrated System, or Salomon Nordic System. These three systems are lightweight and connect differently to the boot and ski. Ensure that your boots are compatible.

Skate skiers use unique poles that are specifically designed to provide the best results. They are noticeably longer than traditional poles used for cross-country skiing.

When planted into the snow, they should reach up between your chin and lips. This added length requires you to use all of the major muscles in your core and upper body. The length also provides more room to push.

Poles are also slightly different in design. They’re stiffer than standard options to overcome the increased wear and tear they’ll experience. The rigid poles also help to provide a stable foundation for pushing off. The snow baskets are also uniquely shaped to accommodate the quick contact. Instead of a traditional basket that maximizes the surface area for grip, these poles have an asymmetrical design. Finally, the grips and hand straps are unique. They are carefully designed to improve your performance as you glide through the trail.

You can’t brave the cold without adequate hand protection. Ski gloves are a must-have accessory on the slopes for a number of reasons. First and foremost, they protect your hands from the cold. Should you fall, your hands will be safe from the snow and moisture.

Thick waterproof materials will properly insulate your hands while preventing the penetration of moisture. Gloves also help to improve grip on the poles. Unlike mittens that limit your movement, gloves allow for complete control of your fingers. Many gloves also feature unique materials that are designed specifically for ski poles. Rubberized grips on the palms and fingers will help prevent you from losing the poles.

Camera goggles are a great choice for guys that want to capture their experience. These unique accessories look like standard ski goggles but house a piece of advanced technology. Instead of carrying around a camera to snap shots of the surroundings, strap on an action camera. They are designed to withstand the elements while recording every moment of the run. Because they’re strapped directly to the head, they can pick up a unique point of view that’s similar to what you see. Every head turn and body movement is captured, allowing you to review your run later. With this additional option, you’ll always have memories of your skate skiing ride.

If you want to practice your technique in the off-season, invest in a pair of roller skis. Skate roller skis are designed to work on a variety of terrains once the snow has melted. They can be used in virtually any climate and provide a very similar experience to skiing on snow. Roller skis feature a supportive shaft flanked by large wheels. Switch out the standard snow basket on your poles for a carbide tip and you can practice all the same techniques on pavement or gravel. It’s a great way to train year-round or simply have fun during the warmer months.

While it does take a bit of extra work, skate skiing is well worth the training. It’s a fun and exciting alternative to classic cross-country skiing. You can speed through beautifully prepared trails while achieving a full-body workout. Instead of going with the norm, take up skate skiing and have a bit of fun.
[divider style=”solid” top=”20″ bottom=”20″]